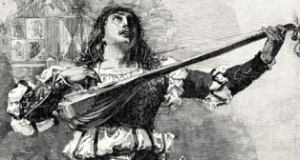 An encounter one winter long ago.

Django played in the tunnels beneath Bank Station.
He fashioned a twisted scale,
that drifted on the air.
And he made me think of Morocco,
and the sweet fragrant smell of Marrakech.

Django: all awkward and angular,
with a mop of thick blond hair.
Had large bony fingers,
that made  me think of Christ’s,
bending round the cross.

Django hummed as he played.
More moan than tune.
It sounded raw and real, and how he could feel the music.
And he made me think of the Mississippi delta,
and the wide expanse of river rolling along.

Django spoke silently to me,
and I to him.
We acknowledged each other,
as familiar strangers do.
With a nod of our heads.

One Christmas.
He wore a velvet hat Trimmed with ermine fur,
and an Arabian cloak to keep out the cold.
And I though of Gold, Incense, Frankincense and myrrh.
And things like joy and goodwill to all like Django.

Django was the name,
sent telepathically to me.
And I thought of Django Reinhart,
and his paralyzed fingers,
and of those who are not as fortunate as he.

Django busked during the winter of 1984,
while miners struck and the GLC crumbled.
And the memory of him, brings into focus,
this current hard winter,
and how warm it is underground.

A Rainy Afternoon in Muswell Hill

Back in the fifties, the phenomena that was Elvis Presley toured fairgrounds and dancehalls. He performed on a circuit that catered for the small-scale. And he never joined the Stadium Rock artists. Elvis ended his career playing to a middle aged Vegas audience.  In-between those early fairground gigs, there were stretches of inactivity and a leather clad comeback performance in ’68.

Maybe if Elvis had lived long enough there would have been a Johnny Cash like renaissance. An album produced by Rick Rubin. A world tour and possibly a headlining of Glastonbury. I’m glad in many ways this did not happen. Elvis lives on: not as titanium-hip swiveller, or as a fossilised talk-show exhibit. He’s not a John Lennon or Jimmy Hendrix; Vegas and those white jump-suits put paid to that. But his music lives on.

I’m doing an old-school tour myself: visiting a bunch of independent bookshops. At each shop, I leave a few copies of Broken Down House.

Yesterday I was in Muswell Hill: an area of North London famous as the birthplace of Ray and Dave Davies, the original Muswell Hillbillies and founders of the Kinks. And because we are in England, it’s raining.

Muswell Hill is affluent and slightly twee; yet it’s nothing like the deserts of Knightsbridge and Mayfair. You can imagine ordinary folk, not Oligarchs making their home in such a place. Ok, these ordinary people will need a hefty bank-balance, but they will not be driving about in Ferraris. Think Volvo, Fiat and reliable Japanese.

I was accompanied on my tour by a friend who knows the place better than me. Before our visit to the Muswell Hill Bookshop, we did a circuit of the areas many charity shops. Second hand books, vinyl and clothes are my thing. I toyed with the notion of purchasing a Moody Blues album from one store, and bought a Keith Richards biography in another.

But the highlight of the day for me was the music playing in each store. Old music: because everything in these places is of a certain vintage. Popular music: because the weird stuff scares away the punters. And public music: because music sounds much better in a room full of people.

I heard Joy Division’s Love Will Tear Us Apart and Elvis singing Love Me Tender. The latter sent me on a mental journey from the fairgrounds where Elvis started his career; to the Hamburg era Beatles, who featured the song in their set. Stuart Sutcliff, the groups original bass player generally performed the song. He was neither a musician nor a singer; but he gave the song a fragility, that suited his wavering voice.

At the end of our tour, we had a drink in a small café. Arranged in the corner was a portable mixing desk and small guitar amplifier. I supposed a DJ would come along later and spin a few tunes. But instead, halfway into our coffees, a guitarist plugged in and began to play. He started with Asturias, the classical guitar piece used in the song Spanish Caravan by The Doors. It was a perfect and musical end to a rainy afternoon in Muswell Hill.

Available on amazon.co.uk and amazon.com

Coming soon to Amazon and bookstores. Available now at the CreateSpace Store.

Broken Down House – Available on Amazon

Out today a new poetry collection from Dan McGill. Get your ebook here : Broken Down House 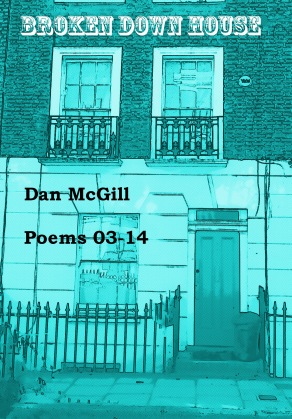 Its World Poetry Day today. Here is one from my forthcoming collection Broken Down House

The way she shakes so,
is inductive of her age.
But in the morning she is still.
Then her body unwinds,
and springs into action.

She wakes before me,
then wakes me with her soft gurgling.
And the force of water against stainless steel.
And the pad of her feet past my bedroom door.

I think of the contrivance Gilbert O’Sullivan made,
when he sang a love song –
only to reveal its subject was a child.

I choose no sucker punch.
The gurgling is the sound her throat makes,
when she wakes.
And the pad.